I suppose children over the years have enjoyed the animated Sinbad: Legend of the Seven Seas (2003) but I, an adult, grew tired of it.

The moral story is not that bad, but midway the disaster action gets too hokey, in my view, for grownups—something a big-screen animator really ought to avoid.  Its unexpected raciness hardly matters; Cowboy Bebop: The Movie it ain’t.

It’s rather fun watching Sinbad, voiced by Brad Pitt, sparring with Miranda, voiced by Catherine Zeta-Jones, as though the two were in a 1930s screwball comedy.  Mark Steyn of the British Spectator (formerly) is right, though:  there are too many Wonder Women in today’s action movies.  That’s what Miranda is.  Why isn’t Sinbad the hero of this thing? 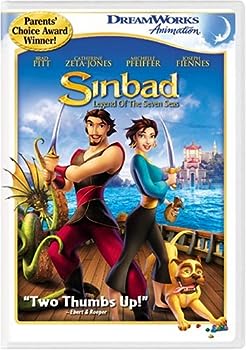