Back to the ’90s for an Italian Masterpiece: “Lamerica” – A Movie Review 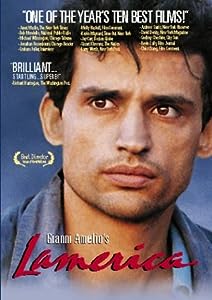 The foreign-aid programs or projects of Western governments are there to help the poor.  They are also there to be exploited by crooks, which is what happens in Gianni Amelio’s deeply humane Lamerica, from 1995.

The crooks in question are Fiore and Gino, two Italians who seek to set up in Albania a non-functioning shoe factory with the foreign-aid money of the Italian government.  Only with the help of a dishonest Albanian official can they do this, for they need a native “chairman” for their phony company and a middle-aged suit finds them one among Albania’s wretched.  This is Spiro, a senile old gent in a rotten, neglected prison from the days of Enver Hoxha.  It is assumed that Spiro is an Albanian hero who fought against communism before Hoxha’s regime jailed him for fifty years, but that is not the case.  He is Italian, a deserter from Mussolini’s army in the late Thirties.

Gino finds this out as his and Fiore’s scheme unexpectedly begins to unravel.  Italy under Mussolini annexed Albania, then lost its rule when the communists took over in 1944.  Such Italians as Spiro (real name: Michele) who stayed in the tiny country hid their nationality lest the new government imprison or execute them, notwithstanding Spiro/Michele got imprisoned anyway.  For a while Gino finds the old man hard to handle, and the wheels of his jeep get stolen.  Later he is detained by Albanian police and his passport is taken away.  Forced to board a ship full of would-be immigrants to Italy, Gino sees Spiro/Michele there, dementedly believing he is sailing to America, or, as he pronounces L’America, “Lamerica.”  Italy, it transpires, is the Albanians’ Land of Opportunity.  Their America.  They yearn to go there.

Gino the con man witnesses and even experiences the communist and post-communist misery and poverty of a broken country (which is not to say he reforms).  There are characters in the film who wish they had communism back, but it so happens that Hoxha’s government left the Albanians no capital to live off of, to work with.  A government once willing to execute Italians, it leaves behind what may be in fact a Putin-like authoritarianism; Lamerica gives us a glimpse of this.  At the same time, the Italy that wishes to aid destitute Albanians cannot even help or rescue a fellow Italian–actually a Sicilian–like the old man.  The tone of this film is gentle and uncynical; Amelio hates no one and is not angry at “welfare fraud” or communism or fascism.  He is a moralist, however, one whose jaw has surely dropped at the scale of human want in a world of government failure and callousness.