Bogart The Lonely: “In a Lonely Place” 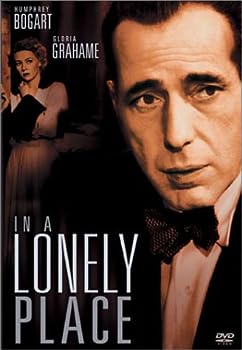 Cover of In a Lonely Place

In a Lonely Place (1950), directed by Nicholas Ray, is a love story with dangerous neuroticism.

Screenwriter Dixon Steele (Humphrey Bogart) loves one woman (Laurel, acted by Gloria Grahame) and is indifferent to the mysterious murder of another (a hat-check girl acquaintance).  This is where it all begins.  Steele, not an ordinary man, is often aggressive, and the police know it.  They suspect him of the murder.  Laurel knows darn well he didn’t do it, but she also grows deeply scared of the gent.  There is plenty of grit in the film, and, for once in an old American movie, a sad ending.  Maybe his wreck of a marriage to Grahame led Ray to insist on a sad ending.

In any case, the screenplay by Edmund H. North and Andrew Solt is compelling, and the film is nice to look at, with a good number of comely women.  As has been claimed, the film’s supporting cast is nothing to crow about, but Bogart is the absolute right fit.  Grahame, though limited, is interesting and winsome.  A beauty with a preteen voice.

A crime movie with a difference, this.