Catholic Meaning In “The Girls of Slender Means” — A Book Review

The “girls of slender means” in Muriel Spark‘s 1963 novel of the same name live in a London hostel during the virtual end of the Second World War.  Economically poor, they are also morally unformed—wayward.  But among them the Catholic Spark has fashioned a Christian character, Joanna, and a character who will become a Christian, Nicholas Farraday, a future martyr.

The two of them are self-abnegators who remove themselves, sooner or later, from the world of sex, Joanna doing so with a mild quirkiness.  The young woman teaches elocution of poetry, and as Ruth Whittaker has pointed out, “poetry for Joanna . . . takes the place of sex.”  For his part, Nicholas becomes acquainted with the hostel and moves from intermittently sleeping with the most beautiful of the girls of slender means—Selina—to Christian service in Haiti.  Both persons end up dying: they die with sacred faith.

The girls at the hostel are superficial, except that Joanna is not a girl of slender spiritual means.  Superficiality here essentially means self-seeking, seeking to satisfy the appetites for sex (Selina) and money (Jane). . . The Girls of Slender Means is another well-written, humorous success for Spark—and another short Spark novel, which is good since most of its sentences call for careful attention to determine the overtones.  And hooray for the overtones. 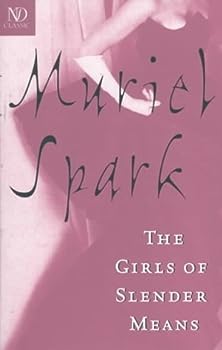 Cover of The Girls of Slender Means