Sergeant York (1941) is a coming-of-age and coming-to-faith story.  There is much that is wrong with it, but Alvin York’s biography is interesting, even with the limited treatment it receives here.  A hellion as a young man, he became a Christian and resisted fighting—resisted killing—in World War I until he discovered such Bible verses as “Give unto Caesar that which is Caesar’s . . .”  It is well known that during an offensive in France York killed and captured a large number of German soldiers.

Religion is handled in a rather callow way in the film, but at least it’s treated seriously.  Howard Hawks’s direction succeeds splendidly in what is a not-bad flick. 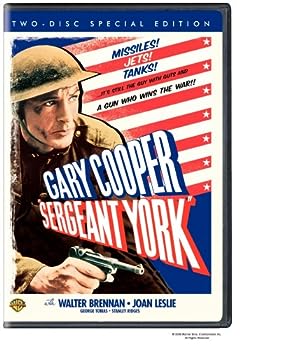