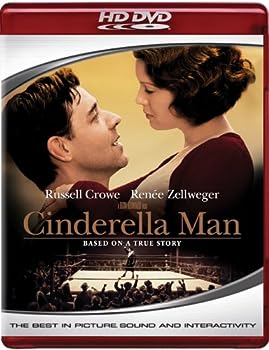 Directed by Ron Howard, Cinderella Man (2005) serves up so much caricature and obviousness it’s almost as dispiriting as Howard’s A Beautiful Mind.

On the caricature side, in this chronicle of the early-adult life of boxer James Braddock (Russell Crowe), there is 1) a repulsive Max Baer and 2) a dismal fat cat who revokes Braddock’s license to box after Braddock fails to put on a good show.  Then there’s Braddock’s wife Mae (Rene Zellweger), more a cliché than a caricature; she dislikes her husband’s profession, his being “a punching bag.”  She visits Braddock’s manager to protest.  Gad!

Cinderella Man is watchable, though, because it’s captivatingly honest enough about poverty, and the boxing scenes are exciting, supplely executed, and perfectly edited.  The poverty is that of the Great Depression, during which Braddock makes very little money since he is unable to fight.  But a second ascent for this nice Catholic man finally begins.  Howard’s film doesn’t stick in the gray matter, but it is inspirational.  And far superior to A Beautiful Mind.