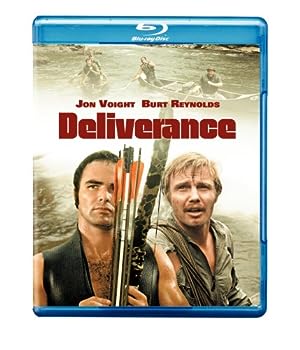 I have read James Dickey’s novel, Deliverance, but I don’t much remember it.  I remember enjoying it, though, and I also enjoy the John Boorman film version of it (1972), whose screenplay Dickey wrote.*

Four middle-aged men head to the forest and take a canoe ride on a treacherous river.  The rapids are bad enough; the men also encounter bullying hillbillies, one of whom they kill after he sodomizes Bobbie (Ned Beatty), a member of their group.  Without contacting the police, they bury the man and then try to high tail it out of the region.  They gradually fear, however, that a vengeful hillbilly is attempting to waste them with a shotgun.

I am perfectly sure the movie is a lesser work than the novel.  How I see Boorman’s concoction is as a nicely shot, mostly realistically made adventure story which conveys a message about moral uncertainty and compromise being involved in physical survival.  The canoe riders do not trust lawful authorities who might help them, and the mountain man whom Jon Voight‘s Ed shoots with a crossbow may or may not be a murderer.  Another thing the film tells us is that packs of violent cretins like the hillbillies are out there.  They may lie low, they may be hidden, but they’re there.

Most, though not all, of the acting in Deliverance is impressive.  A fine thespian, Jon Voight is nevertheless a bit unsteady here, maybe because the script “does not offer him sufficient motivation and opportunity for emotional shading” (John Simon).  Agreed.  Even so, the film is anything but dull.  It’s exciting and, in its own way, trenchant.  And it’s a nature lover’s film.  I firmly disagree with the critics who dismiss it.