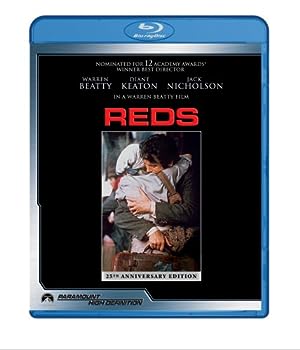 The Warren Beatty movie, Reds (1981), is a grabber about the American pro-Communist journalist John Reed (Beatty) and his wife Louise Bryant (Diane Keaton).  Often fascinating, it is also, alas, extremely faulty, and its biggest problem is the use of real-life elderly “witnesses” who yak about the John Reed they saw and knew about.  Rebecca West, George Jessel and Will Durant among them, these people make observations that add nothing to the on-screen story, not least because they utter things the rest of us already know.

Beatty’s acting, though not memorable, is palatable.  Keaton does her best to create a character, but some of what she has to do is plainly beyond her.  Director Beatty—co-scenarist too—mostly wastes Jack Nicholson in the Eugene O’Neill role, and Paul Sorvino is sadly almost laughable.

Reds is sufficiently honest to affirm that the Russian Revolution did not liberate people; it oppressed them.  It says, in addition, that political movements are (constantly) hindered or damaged by natural complexity and human variety, even, in fact, by going against nature (as Alfred Jay Nock knew).  As it happens, Bolshevism, in its cruel determination, went not only against nature but also against people.