Falling Into P.C.: The Film, “Falling Down”

In Joel Schumacher’s Falling Down (1993), Michael Douglas plays divorced, jobless, bespectacled Bill, who snaps under modern day pressure and starts doing deleterious things en route to his ex-wife’s house.  Its first half hour is wrenchingly honest, but then it gets very wobbly.  It politicizes itself by showing how terrified it is of seeming more essentially conservative than essentially liberal, when only political neutrality would have saved the day.  Here and there the film is highly imaginative, and the acting of Douglas, Barbara Hershey and Robert Duvall is un-hammily not to be improved on.  James Newton Howard’s score is sleek and fervid.  The script, however, turns into a p.c. debacle, hoping, really, to be more ideological than artistic; and the film’s visceral power doesn’t stand a chance against that.  It deflates. 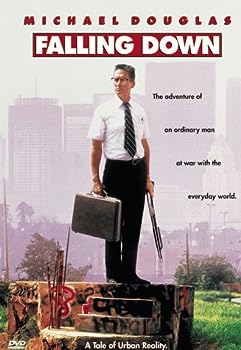 Cover of Falling Down