Set in New York during the Twenties, Thomas Mallon’s comic novel Bandbox (2004) chronicles the doings of those who put out fictitious Bandbox magazine for men.  Indeed, they struggle to keep the magazine afloat in the face of such realities as gangster involvement and the recalcitrance of film star Rosemary LaRoche, intended for a cover shoot.

A man who values animals (sometimes treated cruelly, to be sure), not people.  The gangster activity of selling illegal narcotics.  A strictly non-intellectual mag which may be considered the Maxim of its day.  Bandbox presents all this–and what we understand, of course, is that much in America never changes (also true of other countries).  And yet, simultaneously, there is that early 20th century innocence among Mallon’s people which many of us today apprehend and which will never exist again.

Great novels, it seems, are no longer being written, and it’s probably undeniable that this one isn’t great.  Still, it’s bouncy and shrewd and enjoyable, the work of a talented writer. 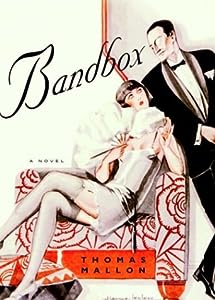 Cover of Bandbox: A Novel