Folly At The Board Game: “The King of Marvin Gardens”

Bob Rafelson‘s The King of Marvin Gardens (1972) concerns the busting-up of foolish dreams in a country of runaway commercialism and fading respectable culture.  (Why, there’s even troilism in the culture now, leading to fatal sexual jealousy!)  It also presents the theme of an individual’s tragic non-control of events in another person’s life.  Thus we have a deeply serious film here, but, sadly, one with a third-rate screenplay by Jacob Brackman. 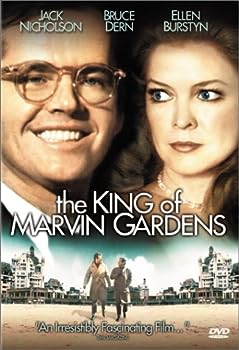 Cover of The King of Marvin Gardens

Almost as bad is that Rafelson’s direction, besides being pretentious, is rather too imitative of Fellini and Antonioni, something not true of the filmmaker’s Five Easy Pieces.  Still, a few very pleasant scenes and images show up, to which it should be added that one man and one woman—Bruce Dern and Ellen Burstyn—perform their roles suitably.  Jack Nicholson and Julia Anne Robinson do not.