So many dubious words have been written about this Disney lark, sequel to the TV specials, that I decided to respond with my own review.

Now a big-screen item, the movie benefits from having mainly the same cast as the debut “HSM” and “HSM2,” the former of which I have seen (and enjoyed), the latter of which I haven’t. I’m not a good judge of choreography but that which Kenny Ortega, the film’s director, and two others have provided seems impressive to me. 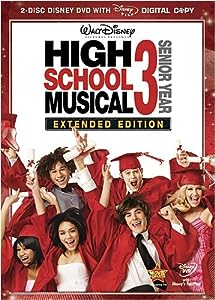 Frequently, at any rate, dazzling sets and costumes overshadow the choreography, and are meant to. Ortega will direct the moviegoer’s eye to only so much.

The libretto–er, the story–is insipid, but the songs are usually satisfying since the melodies are neither dull nor flat predictable.

There’s a lot of snappy rhythm too.

Zac Efron is nigh perfect in the role of Troy except for having a rather whiny, nerdy singing voice for ballads.Vanessa Hudgens is not the actor or dancer that Efron is, but although her voice is not a grabber it is effective.

What’s more, she’s beautiful and charming–even more charming than Ashley Tisdale, a spectacularly good performer here. For a long time they, and everyone else, sustain the power of “High School Musical 3,” but during the final half-hour the whole chaste project goes down in flames.

This is because the book becomes worse than it was and the last few numbers are not up to what we saw earlier. In addition, for the movie to reprise the song “We’re All in this Together,” from the first “HSM”, is annoying.

Though marvelous in multiple ways, this Disney lark–speaking of the first “HSM“–slowly becomes inferior to it.