In the 1946 Hitchcock picture, Notorious, Alicia Huberman (Ingrid Bergman) is a woman of scandalous character whose German father gets his comeuppance for treason.  Then she is recruited by the U.S. government agent (Cary Grant) who will fall in love with her for the mission of discovering what her father’s Nazi associates are up to in Rio de Janeiro.

The free-floating romance between Alicia and Devlin, the agent, no longer holds up (if it ever did) in Ben Hecht’s highly unlikely plot.  Devlin behaves like a fool over Alicia’s fake relationship with once-smitten Nazi, Alexander Sebastian (Claude Rains), one of her father’s associates.  One would think he’d be grateful to her.  All the same, Bergman and Grant do have chemistry, and as usual with Hitchcock, Notorious is deftly, splendidly shot.  Plus it’s nearly as engaging as, say, Shadow of a Doubt. 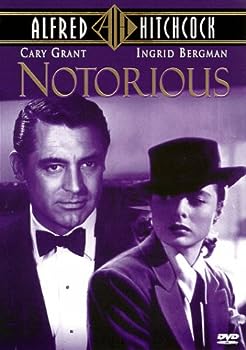