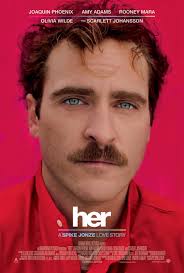 Wherein Joaquin Phoenix falls in love with a computerized operating system with a female voice. . . The near-future technology in this seriocomic film can be fascinating, the best thing about it, but what is not fascinating at all is the way contemporary movies like this seem to be obsessed with sex.  Sex is not the subject of Her, so why the obsession?

What makes it worse is that Jonze leaves the impression that he understands very little about relationships between men and women.  The one between the Amy Adams character and her husband is pretty wispy, vacuous, as is the one between Phoenix and his soon-to-be ex-wife (Rooney Mara).

What could have been a ringer of a film is a somewhat distasteful and even mildly boring “art” product.  Jonze has it in him to make a superior product, better art.  Maybe next time.