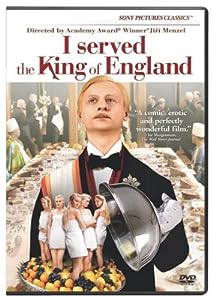 Cover of I Served the King of England

Czech filmmaker Jiri Menzel adapted, in 2008, yet another novel by Bohumil Hrabal–this time, I Served the King of England (with English subtitles).  Though I haven’t read the book, I find it impossible to doubt that it’s a very good film version, one for which a talented man is responsible.  Dark satire is here but no contempt for the characters, and a fun-loving style springs up, even to the point of exhibiting a peculiar, silent-movie mode for an early sequence.

Menzel’s hero, Jan Diti, initially sells hot dogs in Prague but aspires to become a millionaire; and moreover, working as a waiter for years, he does everything right.  Nothing is too challenging for him; he even brings ecstasy to the prostitute he beds.  But things go wrong, patently, after Jan meets Liza, a Hitler-loving German girl, with the hideous merger of Nazi-blessed religion and clinical science taking place.  And things go wrong after Jan finally makes his millions and Communists enter the picture.

Ah, well.  As a misanthropic, 60-year-old Czech professor tells Jan, “Man is the progeny of Evil [by “Evil” he does not mean God]–criminal and stupid.”  Indeed, the situation is “worse than that,” he says, because–and this is interesting–“all philosophers and prophets exclude Jesus Christ.”   Assuredly the film is about the (often efficient) enemies of civilization.

Plenty of artistic prowess is here.  In one scene, rich old men, while dining, gaze at a half-naked girl lying on a revolving platform.  Afterwards she quietly strips for head waiter Jan so the two plebs can have their own funtime.  Another bit of footage offers a shot of Jan and Liza sleeping in bed after lovemaking–the Czech fellow fully surrenders to the German woman–before the soundtrack produces a solemn radio announcement about Czechoslovakia’s late-Thirties surrender to Hitler.  And then there’s Menzel’s success at getting expert comic performances from his actors.  Ivan Barnev is buoyant and unself-conscious as a young Jan, Oldrich Kaiser is convincingly subdued as an aging Jan.  Julia Jentsch, as Liza, is a perfect political fanatic, listening without conscience to prophets who exclude Jesus Christ.

It will probably be a long time before I see another tragicomedy as palatable as the absorbing I Served the King of England.