Spike Lee’s 25th Hour (2003), which concerns a drug dealer’s last day of freedom before his prison sentence begins, is a sluggish and offputting film which I didn’t bother watching to the end.  Lee’s style is pushy and unreal, and there is too much of Terence Blanchard’s often gimcrack music.

“At its best,” wrote David Edelstein for Slate, “25th Hour is a melancholy tone poem,” but I wouldn’t expect a cinematic tone poem to be as talky as this.  And that it is genuinely poetic is debatable. 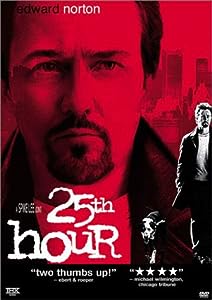