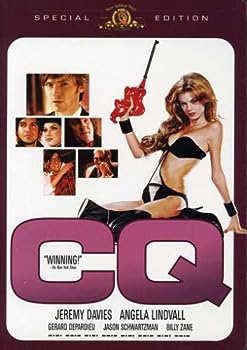 This the debut feature of Roman Coppola (Francis’ son) takes place in Paris and blithely examines the fine arts of making cinematic mediocrity and pining, or half-pining, for a beautiful woman.  The mediocrity subsists not only in Dragonfly but also in the personal, Godardian picture Paul is privately shooting on the side.  The beautiful woman is the supermodel playing the sci-fi heroine.  The problem is that Paul has a French girlfriend, frustrated and sometimes scrappy, whom he is neglecting.  (Paul himself is an American.)  CQ, which is code for “Seek You,” is good at exposing an ignorant young man’s romantic limbo, his aimlessness.

Although it has little wit or insight, the film is fizzy and unusual.  I wish it were better acted.  Both Jeremy Davies (Paul) and Angela Lindvall (the supermodel) are colorless.  Jason Schwartzman was good in Rushmore but not in this.  In contrast, Elodie Bouchez blisters and delights as the French girlfriend, and Billy Zane pleases drolly as a cast member of Dragonfly.  Sturdy Gerard Depardieu is also on hand.  Coppola penned as well as directed this Gallic curio, made in English, and unwittingly pays homage to the most cordial of French-American relations.  You don’t mind watching snow fall on the moon before getting to that homage, do you?