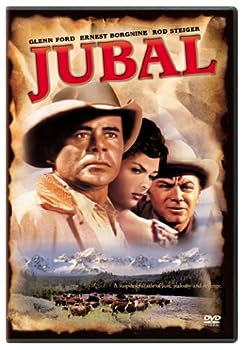 Western time again.  In the beautiful Jubal (1956), properly in color and directed by Delmore Daves, Glenn Ford stars as a cow hand made near-aimless and solitary by life.  Hired to work at Shep Horgan’s ranch, he—Jubal Troop by name—is the Joseph to the Potiphar’s wife of Mae Horgan, who is the boss man’s missus.  Mae tries vigorously to coax Jubal into a sexual relationship, but the cow hand will have none of it.  He isn’t like the odious, hypocritical Pinky (Rod Steiger), who often gets fresh with the dissatisfied Mae and who turns into Jubal’s most dangerous foe.  Fact is, Jubal has eyes for a young female member of a Mormon-like sect that moseys onto Shep’s land and that Pinky callously wants to stomp on and Jubal is nice to.

Kindness meets bullying, amorous desire meets wounded vengefulness:  this is the riveting Jubal.  Valerie French plaays Mae and Felicia Farr plays Jubal’s eventual girlfriend, and both are exquisite-looking.  Ford is ever the Westerner, as he was in 3:10 to Yuma, and Ernest Borgnine is forcefully enjoyable, and believable, as Shep the ranch owner.