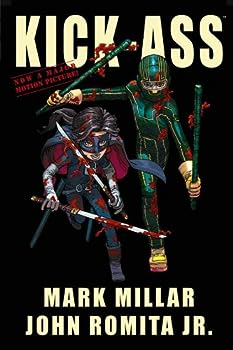 I happened to read the second volume of Kick-Ass (titled Prelude: Hit Girl) before reading the first volume, but it hardly mattered.  I was not at all confused by either volume, especially after seeing the movies, although I found myself surprised that the well-liked first flick wasn’t terribly faithful to Mark Millar‘s graphic novel.  (But it was faithful enough.)

The story in Kick-Ass, like the artwork, holds my attention, and even more pleasing are the sometimes funny details.  As usual, that John Romita Jr.-Tom Palmer-Dean White artwork is hideously bloody, and Millar’s dialogue, etc. is not only anti-liberal but stunningly and aggressively so.  A few feminists have probably considered the book sexist, which it isn’t; but, oh, is it ever politically incorrect!

Overwhelmingly rowdy too.  I had a good time with it.