Lust & Then Some in “Lust, Caution” – A Movie Review

Mr. Yee (Tony Leung), frankly, is a man who deserves to die.

Along with being a traitor to his country in the Japanese-occupied Shanghai of the 1940s, he murders and tortures resistant Chinese countrymen.  Patriotic activists want to kill him; specifically, six university students do.  One of them, the inexperienced and romantic Wong (Tang Wei), agrees to infiltrate Mr. Yee’s circle by befriending his wife and then becoming his mistress.  By and by she will lure the evildoer to her fellow students’ gunfire.  But Yee is hard to assassinate.  For one thing, the sex between him and Wong, though it resembles agony, means something to Wong.  She is moved by Mr. Yee’s emotion, by what appears to be love.  At the same time, she does not doubt that he must die.

This is not all that’s going on.  “Would you believe me,” Wong says to Mr. Yee, “if I told you I hate you?”  Yee answers that, yes, he does believe her.  These words are spoken because instinctively Yee knows that Wong is a member of the resistance, that she is his enemy.  Maybe he suspects he is a doomed man.  But he never admits this and probably hopes he can win Wong over.  Critic James Bowman, in his website review, is right that Lust, Caution “transcends ideology . . . by making us see its irrelevance to the real well-springs of human action and feeling.”

This is one of Ang Lee’s best films.  The man who made Eat Drink Man Woman (1994) hasn’t lost his touch, for LC is adeptly directed and acted.  Its necessary eroticism earned it an NC-17 rating. . . Wong is a woman who barely conceals her passion.  Her breasts are small but, when she sleeps with Mr. Yee, her nipples are powerfully erect.  Copulation here proceeds in such a way that it belongs to a sphere of its own, a separate world.  Fascinating and honest–this is what Lee’s superlative film, based on a story by Eileen Chang, is.

(In Mandarin Chinese with English subtitles.) 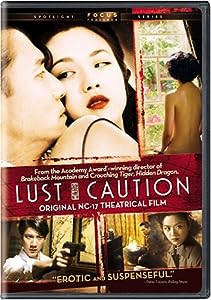