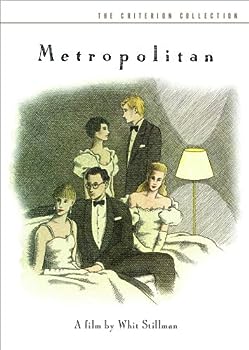 The characters in Whit Stillman‘s first film, Metropolitan (1990), are socially adept preppies (is that redundant?) who prove how much they’ve learned from and delighted in the prodigious world of ideas.  Politics, social decline, literature, their own generation—all these are discussed as extensively as the bright boys and girls can manage it.  Religion is, too, though not much.  Nobody is living religion any more than he or she is living anything else, members of the “untitled aristocracy” as they are, except for Tom, who tries to abide by the moral principles of socialism as he sees them.  A certain stagnation prevails.

The social scene is all most of these people have for sustenance.  If the world of ideas is having any influence at all, it must be on sensitive Audrey, lover of Jane Austen and Mansfield Park, who may be imitating Mansfield‘s Fanny Price by affectionately longing for socialist Tom the way Fanny affectionately longs for Edmund.  And perhaps it is significant that the man Fanny loves is a clergyman whereas the one Audrey loves is in truth not even much good at abiding by socialism’s moral principles.

But at least Audrey wants love for sustenance, as do the other girls in the film, eventually.  For all the stagnation, change is as inevitable in these preppies’ lives as it is in The Cherry Orchard, and who knows?  Maybe religion is around the corner.  Nobody knows just where the language of theology and morality will take a person.  In one particularly funny scene, someone calls a handsome chap named Nick a hypocrite for sleeping with a slut (to find out why he is called this, you’ll have to see the film) to which Nick responds, “It’s not hypocrisy . . . it’s sin.”  And although the slut, Cynthia by name, immediately and confidently murmurs, “It’s hardly that,” the peculiar statement remains in the air, its weight undeniable.  When it isn’t fatuous, language here does have weight, not least because it is witty.  And, yes, fatuity gets spoken, as it does by all of us, but intellects here are not fully cultivated, not completely mature.  Will they mature?  What is this maturity?  How likely the members of an untitled aristocracy are to find out I don’t know.