Mike White Is Corny And Worse: “The Good Girl” 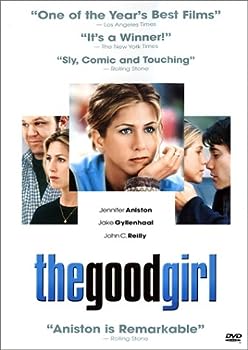 Cover of The Good Girl

Jennifer Aniston plays Justine Last, a retail store assistant who attempts to escape her hated husband and her hated life by having a no-account affair with a young neurotic (Jake Gyllenhaal).  Intelligent people are well aware that the film is dreadfully condescending to small-town Texans, but it is also true that after the condescension finally eases up, scriptwriter Mike White proffers a phony happy ending.  We are prompted to ask a few questions:  Why, really, does Justine hate her husband (John C. Reilly)?  Because he frequently smokes pot?  Did she not know what he was like before they got married?  Did he have her fooled?  No answers are supplied.

White substitutes serious intent for credibility.  Eventually Justine’s hubby learns of her unfaithfulness, but, well, he accepts it.  He stays married to her.  Convincing?  No.

Directed by Miguel Arteta, The Good Girl is an unprofound nonentity, the very thing the filmmakers don’t believe it to be.  Its cheapness is enough to make it a nonentity.  Mike White himself, an actor as well as a screenwriter, plays Corny, a security guard and a Christian, one who turns out to be, in Justine’s words, a “Bible-thumping pervert.”  At length he gets beaten up for something he never did, which is, to White, no big deal.