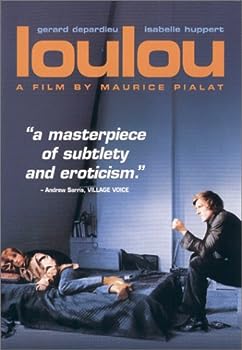 In the 1980 French picture, Loulou, by Maurice Pialat, people drift (rather quickly) into intimacy and betrayal and pain as they lead dismayingly unconventional sex lives.  Nelly (Isabelle Huppert) resists her unimaginative husband (Guy Marchand) and finds, or think she finds, both sex and love with jobless ex-convict Loulou (Gerard Depardieu).  Loulou is a thoroughgoing catalyst, gaining male enemies, prompting a female acquaintance to voluntarily stand topless before him.  He can turn anything on its head.  Depardieu is right for the role but offers a little too much facial play, whereas Huppert’s facial play is proper.

Huppert is superb, making Nelly as ordinary as she is combative, as stubborn as she is weary.  Marchand is marvelously true and subtle.  Pialat’s direction never goes clunky or flat, and with Yann Dedet’s editing the film’s pace is good.  I might add that Loulou also makes you feel like a bit of a snoop.