Nice Is “The Good Fairy” 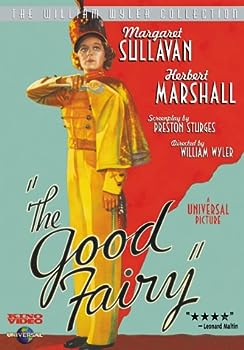 Cover of The Good Fairy

Ferenc Molnar probably wrote a delightful play when he wrote The Good Fairy, since it was turned into a delightful 1935 movie by William Wyler.  With cool subtlety Margaret Sullavan (once married to Wyler) enacts a friendly, callow girl raised in an orphanage and encouraged there to practice good deeds.  She does one, willy-nilly, for a professional man (Herbert Marshall), a lawyer whose integrity is sadly losing him money.  But to accomplish this, Sullavan’s “good fairy” has to lie to a love-hungry CEO (Frank Morgan), who is generous enough to bestow wealth on the man he believes to be Sullavan’s husband—the lawyer.

Both men are needy in their own way, albeit Sullavan, or Luisa Ginglebuscher (her character’s name), can help only one of them.  The CEO is privileged regardless, and it impresses that the film does something many modern-age people would disdain.  It looks through a positive lens at “men of privilege.”  Yes, the lawyer is poor but, as an educated man, he could gain privilege—and wealth—at any time.  And he does.

A true artist, Preston Sturges, wrote the screenplay for Fairy, and even though it isn’t one of his “personal” works, no doubt he understood what Molnar was doing.