Not Bad For Redford: “Quiz Show”

1994 saw the appearance of yet another phony and unprofound docudrama: Robert Redford‘s Quiz Show.

It deals with the deception scandal surrounding television’s “Twenty-One” program in the late Fifties; contestant Charles Van Doren even had to face a congressional committee.  Redford and screenwriter Paul Attanasio achieve little of significance with this subject, especially since they inexcusably patronize quiz show-loving American suburbanites of that era (my, my, how could they not have known “Twenty-One” was rigged!).  For some reason they also seem enamored of literary critic Mark Van Doren, Charles’s father, and moreover tend to inject their film with too much hyperbole.  Or is this the fault of the actor John Turturro, who overacts Herb Stempel?  Well, I don’t think it’s entirely his fault.

Despite all this, the story is well structured and the dialogue clever.  Redford produced the film and saw to it that his direction for it was smooth and vigorous.  Except for Turturro the cast is outstanding:  as Charles Van Doren Ralph Fiennes is intelligent and self-controlled, and has a classy look.  Paul Scofield as father Mark holds up well under Attanasio’s hero worship, though plenty of lesser actors could have handled the role.  Rob Morrow is appealing as a government investigator.  Quiz Show is a middlebrow worthy which I’m glad I saw but have never prized very highly. 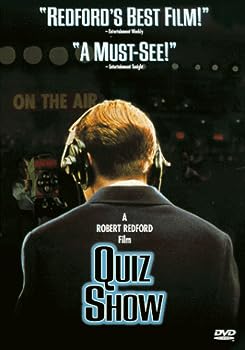