On Ozick’s Lengthy Story, “The Shawl” 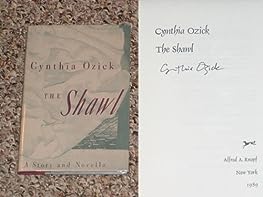 Cover of The Shawl

There are politically correct people who would yammer about the Jewish woman, Rosa Lublin—in Cynthia Ozick‘s novella, The Shawl—yelling “Sodom!” when she sees two male lovers lying naked on the beach.  They would foolishly suspect Ozick of being “homophobic.”  But such people understand nothing about war or brutality or trauma—at least the trauma of others.  Rosa was in a German concentration camp, and the Nazis murdered her infant daughter, Magda: the shawl of the story’s title was used in swaddling the child.

Living in Florida, Rosa behaves as though Magda were still alive, for only the past has any substance for her.  The present is dead, incomprehensible.  It is necessary to ask, though, whether Rosa is mad, to which I respond that I think Ozick is presenting her as traumatized.  Not mad, but eccentric and impractical through trauma.

A mother with a single child who is dead can easily be a “crazy woman” (a phrase of Rosa’s).  On the last page of The Shawl, however, Rosa manages to demonstrate a patent sanity, an encouraging note in this strong, excellently written 1988 fiction.