On to Britain and “My Summer of Love” – A Movie Review 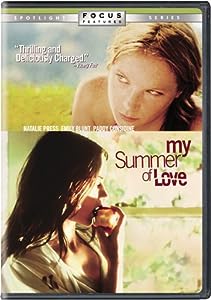 Cover of My Summer of Love

A teenaged redhead called Mona (Natalie Press) lives in Yorkshire, England with her brother Phil (Paddy Considine), a former convict.  They constitute the only family the pair have, the mother in fact having died of cancer, and their residence is a pub which Phil is turning into a Christian meeting place now that he claims to have found God.  Not a whit happy over this religious conversion, Mona misses the man her brother used to be and childishly weeps because of it.  After spontaneously calling Phil a fake, she goes on to eventually befriend a girl named Tamsin, played by Emily Blunt, who is a lovely mischief maker.  Loss and dysfunction in the family drive both girls into a warm concord which soon waxes sexually intimate despite Mona’s and perhaps Tamsin’s heterosexuality (evidenced in Mona’s case by her doomed affair with a married man).  In truth, what they are also driven to is role playing, fraudulence and–when you come down to brass tacks–sin.  This, to be sure, is the designation one could slap on what Tamsin, as immature as Mona, does to her lover.  The outcome is lamentable.

This British film by Pawel Pawlikowskyis flawed–the doings of Tamsin and Phil are a little less convincing than they ought to be–but, too, it is aesthetically pleasing with its potent closeups and Ryszard Lenczewski’s nicely rugose cinematography.  And the actors know what they’re doing at every second.

Even so, there is this:  in Christian circles there are people who are self-deceived, who are unwittingly faking it.  The pre-“born again” Phil was a quite violent criminal, and it turns out that the “born again” Phil is violent as well.  Indeed, he is a faker, hoping against hope that he has not remained the man he used to be.  But in frustration Phil screams at the other religious believers in the ex-pub, “You’re all fakers!” and the film appears to accept this as woeful truth.  Tsk, tsk.  Phil and all his new friends:  nothing but religious frauds. But why, I’d like to know, should this be so?  It has to be nonsense.  Another question, possibly unfair, comes to mind:  Must Europeans such as Pawlikowski be so ignorant about Christianity?

A lot of talent can be observed in My Summer of Love, but the film is a nice-looking liar.  And Emily Blunt’s nudity is wasted on it.