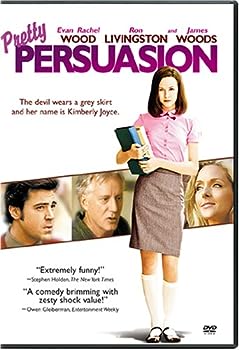 What David Denby wrote in The New Yorker is defensible:  the film is a “poison-pen letter to a country [America] swollen with self-esteem.”  It has a lot to do with disagreeable, narcissistic behavior throughout American society, involving all ages.  Even the falsely accused teacher is sorely self-serving.  But the truth of the matter is that Evan Wood deserves better than a film which turns its misanthropic attitude toward a 15-year-old girl and not only the film’s adults.  Miss Wood handles speech and timing unerringly, and is pleasantly assured in her unrealistic part.  Pretty Persuasion is unworthy.  As frequently happens in movies nowadays, its dirty-mindedness, to lift Denby’s word, quickly gets boring.