Queen Christina (1934) transcends its flaws.  Directed by Rouben Mamoulian and starring Greta Garbo, it relates historical nonsense about the 17th century’s Queen of Sweden who abdicated her throne, but the historical nonsense is not a flaw.  We can take comfort, after all, in such elements as S.N. Behrman’s literate dialogue and the disturbing effect of the abdication scene.  Mamoulian worked well with what he had, albeit he didn’t have much in the way of production design.  For outdoor scenes (not all of them), there is too much studio fakery.  Garbo deserved better, I think.  Not only is she beautiful, she also supplies just as much femininity and tomboy toughness as Hollywood’s Queen Christina needs.  The real Christina—or Kristina—was a lesbian; Garbo’s queen renounces her crown for a man’s love.  The man in question is played by John Gilbert, who, unfortunately, overacts for a while.  Garbo’s acting is steady.

Queen Christina ought to have been a stronger achievement, but it entertains us all the same.  That is all it was meant to do. 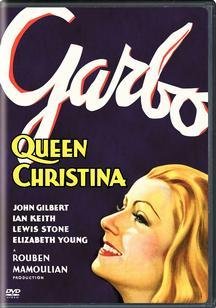