Tape (2001) is a filmed play, and filmed wisely with rapid cutting, flash pans, and DV technology.  The director is Richard Linklater, the playwright-scenarist Stephen Belber.

All the action takes place in a single motel room in Lansing, Michigan, and there are only three characters.  Vince (Ethan Hawke) is a shiftless drug dealer and volunteer fireman who wants his chum John (Robert Sean Leonard), a filmmaker, to admit that ten years ago he raped Vince’s ex-girlfriend, Amy (Uma Thurman).  He craves the satisfaction of hearing such a confession from someone with whom Amy became involved, even sexually, after the failure of his own chaste relationship with the girl (Amy, not Vince, insisted on the chastity).  When he eventually gets what he wants, he gleefully tapes it.

What is here thematically is the heinousness of human nature followed by the beating down a bit of that nature by (for whatever it’s worth) the desire to apologize.  Violation in another’s life is another obvious theme, though that’s not all.  In this present age of fornication, the concept of rape is sometimes hopelessly hazy.  Did John injure Amy’s person the way Vince hopes to injure John’s?  Or did something different happen?  Vince is vindictive, but what does revenge mean when the truth is elusive?

Tape is a small-scale play, and as a film it is even smaller.  This is too bad, but at least it is cinematic.  It’s just utterly confined, though with Belber’s agon making it gripping.  So do the first-rate actors. 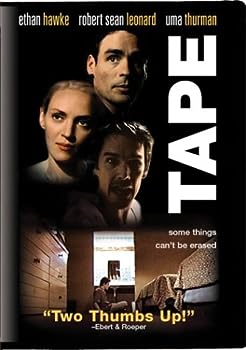