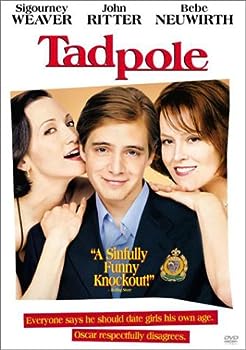 There is fine acting from Bebe Neuwirth, John Ritter, Sigourney Weaver and the newcomer, Aaron Stanford.  There is a fairly funny and unpredictable script by Heather McGowan and Niels Muller.  Gary Winick‘s decision to shoot the film in DV is acceptable because Tadpole (2000) is, to use another critic’s proper adjective for it, unassuming.

Nevertheless, this Graduate-like film with a 15-year-old Benjamin and Neuwirth’s Mrs. Robinson would have been far better had the precocious boy (Stanford) not been in love, or “in love,” with his fiftyish stepmother (Weaver).  With Neuwirth the boy is not smitten; with his father’s wife he is.  It’s a sleazy and ill-fitting item.  It knifes the otherwise successful confection right in the back.