Song Of The Soul: “The Song of Bernadette” 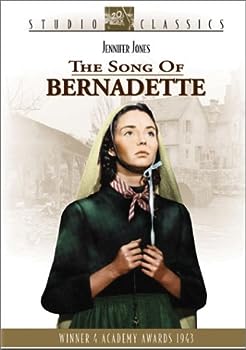 Cover of The Song of Bernadette

The central character in The Song of Bernadette (1943) is a good girl who becomes a devout and holy one.  In Lourdes, France she sees a vision of a lady who eventually says “I am the Immaculate Conception” and so convinces all that she is the Blessed Virgin.  The film, well directed by Henry King, is about changes and revelations related to the soul. . . Really, a Protestant doesn’t know what to make of a pronouncement like “I am the Immaculate Conception,” but this might induce one to contemplate whether all his theological beliefs are true. . .

Although I’ve never read the Franz Werfel novel on which the movie is based, I can declare Bernadette a beautiful and sensitive cinematic work.  Jennifer Jones enacts a spiritual person flawlessly.