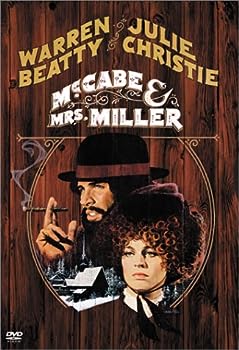 Robert Altman‘s McCabe and Mrs. Miller (1971) does appear to be far more truthful about the American West than other Westerns (i.e., mythological Westerns).  However, I don’t know which is more ill-written—the movie’s Leonard Cohen songs or the Altman-Brian McKay script.  Er . . . it has to be the script.

Warren Beatty enacts a profane cynic who becomes a dominating businessman in a frontier town, and gradually he begins a relationship with a brothel madam (Julie Christie) which is pretty hazy.  The film is boringly and laughably anti-capitalist and has a lot of lame, dopey dialogue.  Although it isn’t Beatty’s fault, he doesn’t really know what kind of man he is portraying, and yet his acting is assuredly superior to that of Christie and Rene Auberjonois, who are merely going through the motions.

The costumes and production design are exactly what a non-mythological Western should have.  Even so, I said the Beatty character, John McCabe, is a profane cynic; hence it comes as no surprise that Altman’s film is an offputting, foul-mouthed (and unfocused) mess.