Tasty: “The Taste of Others”

The subject of taste is extensively covered in this French production, and included is the amatory taste in, or for, people: the desire of others.  A married businessman desires his English-language tutor, a 40-year-old stage actress named Clara.  The tastes of his interior decorator wife, who has arranged that the couple live in a “candy dish” home, leave the businessman cold.  Beau-less Clara refuses to reciprocate but, not getting any younger for her audiences, is gradually tempted.  There is a hole at the center of her existence.  Likewise with a chauffeur called Bruno, who is discarded by his faraway girlfriend on whom he has cheated, anyway.  Tastes at cross purposes.

The married businessman’s bodyguard, Frank, falls for a pretty barmaid with a taste for both selling and using illegal drugs and for fornication.  Ex-policeman Frank will accept the latter but not the former.  The thought of conventional married life appeals to the pair, but do they really have a taste for it?   We know what demands Frank will be making of the barmaid.

The film has much to do with transience.  Because of the taste of others, transience arises.  Clara’s acting career is slowly evaporating.  The businessman’s marriage gets upended.  And so on.  Life with its transience, however, must go on.  To the self-centered interior decorator, Bruno mutters, “The world is what it is,” and since this woman insists on wearing blinders—notice how indifferent she is to owning a dog that nips at people—Bruno adds that she ought to go live in Disneyland.  Disneyland is the equivalent of a candy-dish home.

I was delighted that this acclaimed comedy-drama arrived and did relatively well in Tulsa . . . 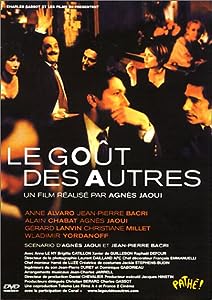 Cover of The Taste of Others [Region 2]