I was going to see Tower Heist this weekend, but I got a chance to see an old epic on the big screen and opted for that instead.  It was Spartacus (1960), one of Stanley Kubrick’s better films–good on the small screen, a gem on the big.  Therein, Kirk Douglas plays the gladiator Spartacus, who is determined to fight historical dehumanization by leading a slave rebellion against ancient Rome.  Douglas has star power but greatness too:  he’s never without forcefulness and personality.  Other great ones are Laurence Olivier, Peter Ustinov and Charles Laughton; every time they’re on the screen we like it.  Jean Simmons, enacting Spartacus’ wife, fills the bill.

I love epic movies; good ones offer cakes-and-ale, as this one does.  They don’t get monotonous.  Kubrick directed carefully and wisely.  Outstanding is the battle scene where the rebels use against the Roman soldiers rollers of burning straw, and the long shot of Simmons and Ustinov riding away on a stretched-out road lined with crucified slaves, Spartacus among them, before the picture ends.  The last epic film I saw in a theatre hitherto (they aren’t plentiful) was Mongol, which was enjoyable but somewhat less so than this one, just as Spartacus is not as great as The Ten Commandments, Lawrence of Arabia and Lord of the Rings. 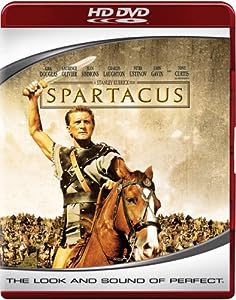