“The Diary of a Country Priest” Is A Great Christian Novel

In The Diary of a Country Priest, the 1936 Georges Bernanos novel, the essentially unreligious (who may be laymen) sin and the young priest suffers.  Cancer becomes his principal burden, and, although the priest finally dies, he is the one who comes out on top, as, to Bernanos, he must.

The thin plot has a local count conducting an affair with his daughter’s governess, and because the daughter, Chantal, resentfully knows about this, the count wishes to send her away.  Meanwhile, the count’s wife is perpetually depressed over the death of her young son, and although she is less of a worry to the priest than Chantal is, it is the countess whose unexpected Christian conversion he engineers.  He receives flak for it, though, after his methods are questioned. . . There is imperfection in this plot, but the characterization is strong—and the insights memorable.

Again, the unreligious sinners are here, but the sense is created that God is unwilling to reject or abandon them.  A cosmic pendulum keeps swinging towards light before it swings back to darkness, and all souls are affected.  Or at the very least we question whether all souls are affected.  For instance, a soldier who respects Christianity nevertheless opines to the priest, “If God isn’t going to save soldiers, all soldiers, just because they’re soldiers, what’s the good of trying?”  He is broaching the subject of how far the mercy of God goes.  Consider, too, the priest’s following statement not about salvation but about human nature, sinful as this nature is:  “the lowest of human beings, even though he no longer thinks he can love, still has in him the power of loving.”  Bernanos’s novel offers Christian humanism at its best, perhaps at its most orthodox.  As for our self-dissatisfied priest, he is not let down in any way, since near the end of the book he writes in his diary, “The strange mistrust I had of myself, of my own being, has flown, I believe for ever.  That conflict is done.”  That conflict is done before the priest dies in grace.  It is a faithful Catholic, Bernanos, who provides this clear uplift. 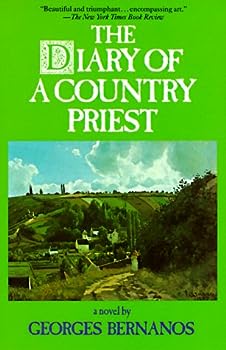 Cover of The Diary of a Country Priest