The Film, “Nothing Sacred” Is Nothing Bad 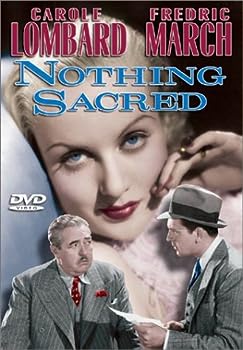 Cover of Nothing Sacred

Was there ever a time when American cities gave great adulation to young women dying of something like radium poisoning?  I don’t know, but in the comic (and funny) Nothing Sacred (1937), the Big Apple does so for Vermont girl Hazel—without knowing that Hazel is shamelessly faking.  It is not even known by the newspaper reporter (Frederic March) who wants the scoop and all the crazy hoopla it leads to.

Pauline Kael wrote that “What are generally sentimentalized as ‘the little people’ are the targets” of this film.  So is Hazel, played by a grounded and never-strident Carole Lombard.  Nothing Sacred is short but filler-free, and peppery.  It’s the Billy Wilder pic that Wilder never made; William Wellman—and writer Ben Hecht—did.