The Movie, “Suddenly” With Its Town Called Suddenly 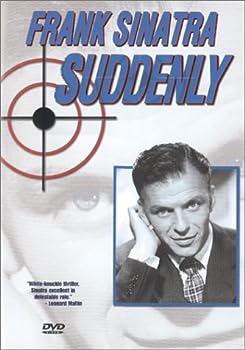 Suddenly (1954) is a pulp fiction film about a trio of punks hired to murder, as he passes through the tiny town of Suddenly, the President of the United States.  It’s properly economical with some vigorous action, as in a strong scene where one of the killers uncontrollably fires his rifle, tat-tat-tat, while being electrocuted.

The movie is respectful of middle-class—and certifiably small-town—American values.  E.g., Sterling Hayden (as a sheriff) keeps inviting Nancy Gates to ride to church with him.  And, yes, the main assassin is a WWII veteran, but was enough of a cur to be discharged from the army.  Frank Sinatra is the star here.  Suddenly is such a basically conservative pic, I’m surprised Ol’ Blue Eyes was initially a Democrat.