The Work Of Sirk: “Imitation Of Life”

The 1959 Douglas Sirk film, Imitation of Life, is being shown for a while in New York City and was called by Charles Taylor in The Village Voice an “American masterpiece.”

To me, not quite.  The movie’s flaws, such as Annie’s overwrought death scene, are glaring.  But it is an absorbing and still provocative work about skin color and aspiration:  it’s the one where the light-skinned girl who considers herself white (Susan Kohner’s Sarah Jane) is ashamed of Annie, her black mother.  Indeed, it focuses on a black woman’s having to live a mere “imitation of life,”  i.e. a life in which she constantly feels unloved.  In this she resembles the Sandra Dee character, Susie.  For Annie, though, the burden is greater.

Imitation is a remake of a 1934 film, but was directed by a man who truly cares about the material.  The two actors complimented by Taylor—Kohner and Juanita Moore (Annie) —are the best, but Sandra Dee is typically endearing.  That she died in 2005 at age 62 brings a painful sigh. 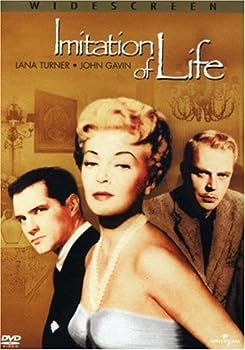 Cover of Imitation of Life