Turning Back the Clock to “Clockstoppers” – A Movie 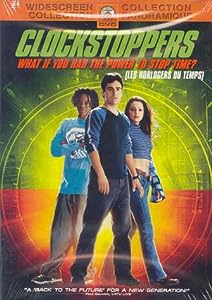 Clockstoppers (2002), directed by Jonathan Frakes, is about adolescents who are empowered by science for moving in hypertime, namely, so fast that everything around them appears as though it were in suspended animation.  A stimulating pop piece for a while, the film delivers a narrative about domestic terrorists that is sheer rubbish.  When we don’t see this narrative, we witness the film singing the praises of teen mischief (mischief in hypertime).  Clockstoppers is worthless.  The movie stars Jesse Bradford and Paula Garces, both undistinguished.  Miss Garces often displays her navel and in one scene wears nothing but a towel but–sorry, Paramount Pictures–because she is just a kid there is no sexiness here.