Ups And Downs In The Movie, “Down With Love” 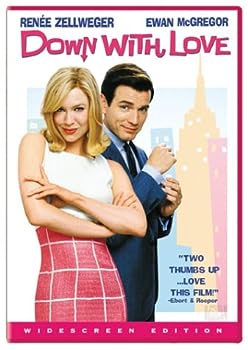 Cover of Down with Love (Widescreen Edition)

Peyton Reed‘s Down With Love (2003) is a charming curio about love and sex.  Actually it values sex over love without realizing it, which is a pity.  Another pity is that it was made strictly in the mode of the old Rock Hudson-Doris Day confections of 1959 to 1964, and so displays some pretty trivial nostalgia, mainly for clothes, room decor and period songs.

Rene Zellweger plays the author of a self-help book, “Down With Love,” Ewan McGregor enacts a Casanova of a men’s magazine writer.  The scenarists insert a mild, reasonable feminism, but err by having Casanova finally turn into an enlightened and sensitive New Man instead of simply a gent thoughtfully in love with Zellweger.  But Down With Love has an agenda, you see.

It also has a nifty opening titles sequence which is so corny it’s hip.