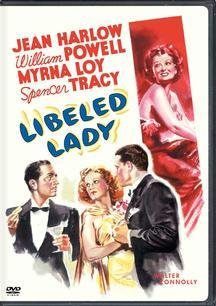 Financial disaster is always looming, for someone—in this way the screwball rom-comLibeled Lady (1936), directed by Jack Conway, is highly relevant to early 20th century America and other Western nations.  The disaster in  question will hit a city newspaper threatened by a staggering lawsuit unless a jobless fixer (William Powell)—he needs the money—can smoothly deceive Myrna Loy into dropping the suit.  Ah, but the hurdles arise because of a conflict between two traditional institutions.  Jean Harlow demands a marriage, right now, from the paper’s managing editor, Spencer Tracy, panicky over the business.  Powell, predictably, falls for Loy and refuses to see any real danger to the business.  There does come to be a danger to himself, though.

Like Noel Coward’s Hay Fever, Libeled Lady is (in my opinion) not all that funny, but it hardly matters since, again like Hay Fever, its plot and characters are supremely interesting.  This describes MANY of the Thirties screwballs.  The movie is based on a story and adapted by three writers—how could

that many heads ruin it?—and its actors have no trouble with comedy or farce (albeit it’s a non-farcical role for Loy).  But hold it: Loy plays a party girl!? . . . Go ahead and suspend disbelief.  The only thing that will worry you slightly is the possibility of Hollywood remaking this notable confection.