Written and directed by John Singleton in his twenties, Boyz n the Hood (1991) is no two-bit feat.  It’s explosive.  Even so, Singleton’s youth hamstrung him into a great naivete, and a certain decadence develops in this film about South Central L.A.

Hood‘s political significance goes no further than to show an African-American boy giving a picture of Ronald Reagan the finger, which is meant to express Singleton’s own anti-Reaganism, anti-rightism.  Or to put into the mouth of a decent man acted by Laurence Fishburne words about how drugs, guns, and even liquor are being transported to the inner cities so that whites can see to it that blacks are gradually polished off.  Absolutely nothing belies our suspicion that this is Singleton’s view too.

The film’s early scenes include some lame, idiotic material about an arrogant black boy (sympathetically viewed by our director) who disturbs a white teacher’s (unsympathetically viewed by our director) grade-school class.  In the religion department, there is some trite philosophical talk about God, uttered by the South Central “boyz n the hood” themselves, and a Roman Catholic girl named Brandi who, despite her moral beliefs, opts to comfort Cuba Gooding Jr. by losing her virginity to him—a decision Singleton finds touching.  After all this, how could I not pronounce Hood decadent? 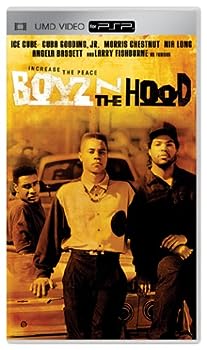 Cover of Boyz N the Hood [UMD for PSP]