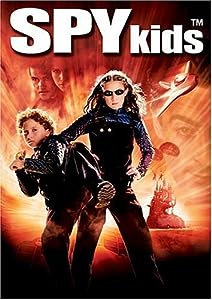 Spy Kids (2002) is yet another action flick–a nutty and charming one.  I’m talking genuine charm, not Hollywood charm, thanks to director-writer Robert Rodriguez.  He patently believes in what he’s doing, he can be funny, and he venerates marriage and family.  (In this movie he does; I don’t know about real life:  in 2006 Rodriguez left his wife and kids for actress Rose McGowan.)  Even his infrequent scatology makes prepubescent sense; prepubescent is what Carmen and Juni, the spy kids, are.

Adequate Alexa Vega provides Carmen with no more and no less than what she should.  Though too soft-spoken, Daryl Sabara (Juni) is sweet and facially expressive.  The stronger actors are Antonio Banderas and Carla Gugino as the spy kids’ spy parents.  Holding the reins of it all is a talented man whose screenplay is original, not an adaptation of a children’s book.  Let’s hear it for Latino heroism!  (In America.)