You Done Good, Miss Polley: “Away From Her”

Alice Munro’s “The Bear Came Over the Mountain” is a clever if almost dull short story about a married woman with Alzheimer’s who, while in a nursing home, grows emotionally attached to another woman’s husband, also with Alzheimer’s.  It makes for a truly impressive film adaptation written and directed by actress Sarah Polley, who gives adequate attention to the sorrow and strain delivered to the sick patient’s once unfaithful husband (Gordon Pinsent).  Almost dull?  No.  It’s absorbing.  Though often with eyes too bright for an Alzheimer’s patient, Julie Christie acts with more savvy and affecting skill than she ever did in the past.  Polley’s nursing-home shots are engagingly true, and her closeups make Away From Her (2006), the picture’s title, an exquisite drama of faces, especially when the camera is on Christie.

The film deals with the fallen-world madness of advanced age.  The dying of a mind and the toll it takes, the senior citizen’s (ugh, that term!) longing for human consolation and companionship—this is the film’s thematic content.  Culpability is another theme.

I’d like to make one more observation:  Away From Her ends with Fiona, the lady with Alzheimer’s, struggling with her words as she expresses her gratitude to her husband.  “You could have just driven away,” she says.  “Just driven away and forsook me.  Forsooken me.  Forsaken.”  “Not a chance,” the husband replies.  It’s a tender scene but, ah, he did forsake her, really, by sleeping with Olympia Dukakis.  (One more act of adultery for Pinsent’s character.)  Such a thing never takes place in Munro’s story, a wise move on her part.  It renders the husband a more sympathetic, a nobler, protagonist.  Polley certainly appears to be an artist; Munro certifiably is. 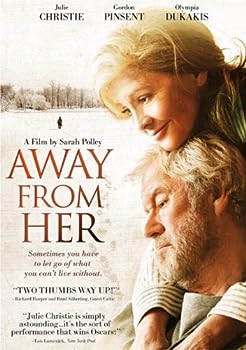 Cover of Away from Her