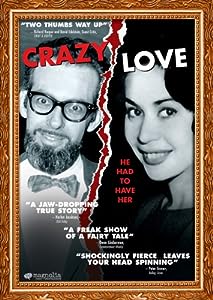 Crazy Love (2007) begins with the murky vision of an injured person, which vision, or eyesight, is meant to be that of Linda Riss.  The man who did it to her was her former lover, Burt Pugach.

A plain-looking New York lawyer with money, raised by a barbaric mother, Pugach fell hard for the nigh beautiful Linda in the late 1950s and started dating her.  But, unknown to Riss, the skinny chap was a married lover, and his wife refused to divorce him.  Linda broke it off, by and by getting engaged to another man.  Mad Burt, however, was obsessed with Linda; he couldn’t hack the idea of losing her.  If he couldn’t have her, neither would any other man:  He hired a thug to throw lye in her face, an act which disfigured and largely blinded the young brunette.  Now deeming marriage impractical, Linda urged her fiance to renounce their engagement, which at last he did.  Pugach, meanwhile, was arrested, tried and sent to prison.  The media coverage was copious.

In prison Pugach wrote and wrote to Linda, declaring his love.  She paid no attention, but Linda was in decline, suitor-less, still a virgin.  Finally Burt was freed.  Can you guess what happens next in Dan Klores’s riveting documentary?  That’s right:  Linda takes Pugach back and the twosome are married.  They’ve been married ever since–usually happily–albeit not without Pugach’s opting to have an affair and Linda’s sad nagging.  Crazy love.  Crazy life.  It is clear that Linda Riss is neither insane nor stupid.  Call her weak if you want to.  To my mind, she was reduced to marrying Pugach, for no one else wanted her.  And she apparently sought financial security.

What a movie!  What’s wrong with it, though, is that director Klores is not sufficiently vexed by a man’s throwing lye in a woman’s eyes, AFTER, in point of fact, the man refuses to tell the woman he has a wife and that therefore their liaison is adulterous.  In other words, he takes domestic violence–and sheer evil–too lightly.  It’s good that his film isn’t moralistic, but bad that it has no moral resonance.  What about the Linda Risses of the world who could never bring themselves to marry their Pugaches?  They wear the wounds of severe violence and must always be alone.  They have truly been victimized.