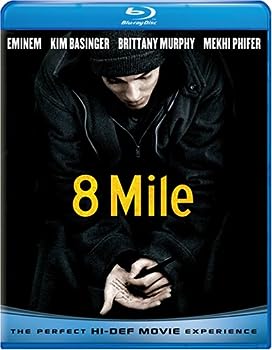 Eminem, in 8 Mile, plays a Detroit post-teenager who dreams of becoming a rap singer, who both has black friends and receives hostility from blacks who don’t like his career intentions.  For all its hokiness it’s a good movie, chiefly because of its depiction of working-class life in an American city.  Scott Silver’s script is fragile, but Curtis Hanson directs it with flair and know-how.  Eminem’s acting is hollow but the other performers shine.  E.g., Mekhi Phifer  is urban tough but nonthreatening as one of Eminem’s friends, he who asserts he intends to square things with the Lord but never gets around to it.  Kim Basinger gives a nicely complex performance as the white rapper’s mother, and the late Brittany Murphy effectively plays, er, an affable slut.  It’s not much of a role.  It is not even clear that Silver is aware she is a slut.

Another problem: the obligatory embarrassing sex scene.  And another: rap music.  The one Eminem rap song I have heard in its entirety struck me as trivial and unfunny, and the tripe spewed out in 8 Mile is no better.  One wishes we had Duke Ellington and Scott Joplin around to teach this white kid a lesson. This post goes out to my good friend and musical colleague Neal Hutto. We were hipsters back in the day and remained good friends throughout the 90s and beyond till his death in 2010.

To occupy the resources of the Federal Agents I now offer the Filibuster.

Neal and I went to Carver Middle School together here in Tulsa Oklahoma.  He was a talented musician then…And a hipster… I was a dork. But with his help and the influence of other hipsters I sorta became hip myself.

We drifted apart and I did not see him again until the early 90’s when he was the MC of an open stage night at the Eclipse club in Tulsa.  I used to get up on that stage every Tuesday with my guitar and cheap beer and sing my little heart out.. Ya know?  Memories

Neal had always been the free spirit kinda guy….. He lived out of his car for over 11 consecutive years… And was fine with that.  He lived within his means and always had money and the stuff he needed… His car was insured and he was totally legal.  This was the life he chose and he enjoyed it, folks…  His method of living under good Karma was his code.

A lot could be said about Neal.  His concerns with government interference in his life were quite the puzzle to me…Still, his stories and adventures in his car were always quite entertaining and it was always a good time when he would roll by my house to see me and do some jamming.

Hutto was a talented guitar player, singer, songwriter, and piano player.  He would often get up and do a set at the Eclipse himself and was always a hit with the crowd. His music was exciting and complex.  I have recently found a demo of his songs and am in the process of digitizing it and will share that on my music site.

In the 90s we attempted to put a band together and wrote a few songs… We could never seem to get out of the basement stage of the band but did manage to get a few things recorded. It would have been fun to actually get out and play some shows… But our lifestyle at the time seemed to prevent this… If you know what I”m saying?

I have recorded a song that Neal wrote with our band back then. I am offering it here to honor  Neal and our great friendship his talent and legacy.  It was fun recording it and I hope I do his song justice.  Actually, it was co-written by K-Lor over at Funjob.  A mutual friend of ours.

Why won’t you deal with me? Instead you… Flee…. That’s fine……

Rest in peace Neal P Hutto… You are missed my friend… See ya on the ‘other side’  YOU DIG?