Naive About “Bring Me the Head of Alfredo Garcia”

I was very hard last year on Sam Peckinpah’s Bring Me the Head of Alfredo Garcia (1974) but, believing it just might be a well-made guilty pleasure (if not something better), I decided to give it another chance.

I was naive—except that the first ten minutes of the film are indeed artistically interesting and should be commented on.  It opens with agreeable shots of a pregnant girl dressed in white pensively sitting on the bank of a pond which a number of ducks have found inviting.  Minutes later, a Mexican land baron sincerely calls for the head of the girl’s seducer to be delivered to him, after which shots of cars and planes taking men to Mexican cities appear.  This engenders the idea that the violent ways of a Central American rural locale stuck in the past are also the violent ways of the present-day city.

Following this inspired moviemaking, however, is trash.  Footage proving that the main actress has beautiful zoomers does not exactly conduce to either art or artistry.  Too, it is not irrelevant to Alfredo‘s sexism. . . The only Peckinpah picture I’VE seen that can be called a guilty pleasure is Straw Dogs. 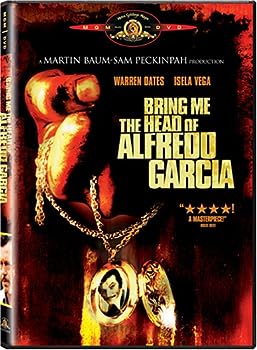 Cover of Bring Me the Head of Alfredo Garcia