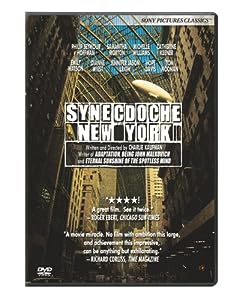 The brooding, ailing hero of “Synecdoche, New York,” written and directed by Charlie Kaufman, admires the pretty legs of his fetching psychotherapist (Hope Davis), which nevertheless extend to at least one foot that is blistered and bruised. Even THIS he has to put up with! It’s a nice touch in an otherwise spurious film–Spurious because it is excessively dark, wholeheartedly pessimistic.

It is a work both surrealistic and absurdist, wherein a perpetually burning house (the house is never consumed but YOU, the dweller, could be; you could die at any moment) is a clever image; but a message of life-is-a-dirty-trick, or life-is-an-illusion, requires no cleverness, and no probing, at all.

Death, illness, failure, loneliness, human treachery all these drive to Kaufman to despair. But there is something else, another reason “Synecdoche, New York” is spurious.

A “synecdoche” is a stand-in word for a more inclusive, and sometimes less inclusive, word: e.g., “head” for cattle. Kaufman’s hero and alter ego, Caden (Philip Seymour Hoffman), creates a grand theatre piece, sans an audience, based on his own life and thus puts together a visual synecdoche. Much of Kaufman’s surrealism is in this, but to me it’s a mistake, it doesn’t work.

But it does give Caden the opportunity to declare that he now understands that every human being, not just Caden, is the director of his or her life story and that all these people “must be given their due.” Which essentially means nothing.

It suggests that everyone is to be given his due, whatever that is, for all the choices he has made. Come again?

The reader should understand, though, that Caden’s realization does not dispel the darkness in Kaufman’s vision. The author of Eternal Sunshine of the Spotless Mind is regrettably unfettered in this intermittently brilliant, depressing dud of a motion picture.

-This is a guest post from my Bro Dean D