“The House of Mirth” on Film – A Movie Review

In The House of Mirth (2001), a Terrence Davies film, Gillian Anderson offers no real surprises as Lily Bart.  But she does offer skill, having an almost childlike quality and the capacity to move us.  Eric Stoltz, as Laurence Seldon, does nothing either particularly right or particularly wrong, but Laura Linney, as Bertha Dorset, is true and wonderfully self-confident.  She and Anderson are the best actors here.  Add to this the spot-on costumes and production design and you have . . . well, not quite the Edith Wharton novel from which this commendable movie was adapted.  It makes me ambivalent in a way the great novel never could.

This is the one about the woman who, without being shallow, wants to marry a man with money, but does not do so.  Instead she suffers and ultimately dies, doing so as a tragic heroine more than as a victim–something Terrence Davies fails to understand.  Thus he has Lily Bart not so much living as simply going downhill.  Moreover, the Lily of the novel rightly appreciates the finer things in life, certainly including material things, but the film never points this up.  It knows Miss Bart isn’t shallow but that’s about it.  She might as well be a thoroughgoing stock heroine.

Yes, Anderson tries to rescue Lily but she can’t–can’t rescue her from what Davies has done.  Though the film has its virtues, it does not understand the novel’s virtues. 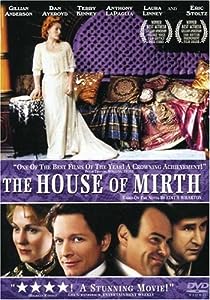 Cover of The House of Mirth